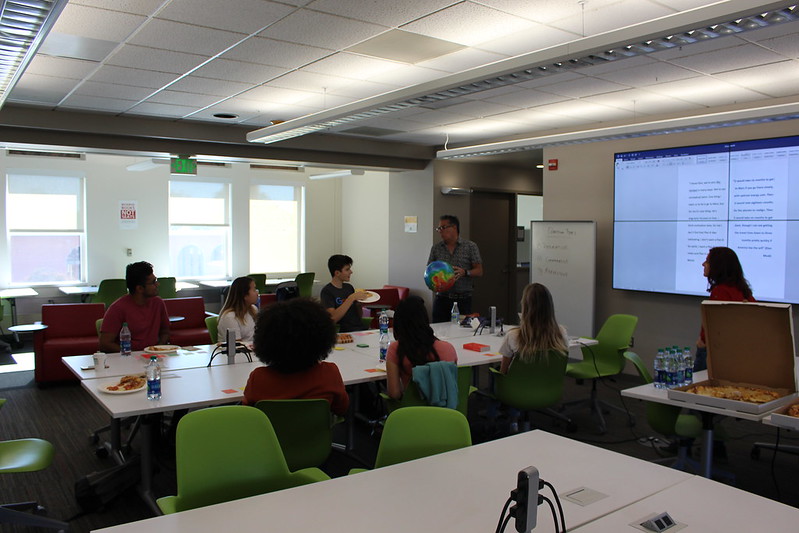 Roll over to scroll through images.

Julius II (b. 1443-d. 1513) was known as the “Warrior Pope,” who told Michelangelo to depict him with sword rather than book in hand. Yet Julius also built his own library, specially housed in the Vatican Palace room, now known as the Stanza della Segnatura, that he had painted by Raphael. The main frescoes depict gatherings of great polymaths from Greek antiquity to the Julius’ time, from Homer and Plato to Gregory the Great and Raphael himself. The frescoes' themes—Philosophy, Poetry, Theology, and Jurisprudence—pictorially synthesize relationships between these four major disciplines from the period. Julius owned books in all these disciplines, and some of his manuscripts survive today.

Students in this Collaboratory reconstructed a digital version of the “Julian Library.” In doing so, they analyzed Renaissance books in USC Libraries' Special Collections; researched the paintings, the collected manuscripts and their authors; and considered Renaissance linear perspective in connection to today’s digital constructs.

Students in this Collaboratory created an interactive virtual environment that allows viewers to explore the Stanza della Segnatura, its vivid frescoes by Raphael, and passages from a Renaissance book by Giorgio Vasari describing the room as it appeared in Julius’ time. Viewers can read relevant passages from Vasari’s text while being directed, in the virtual Stanza della Segnatura, to the frescoes and figures he references. Lines across the room connect the figures in the order in which they appear in Vasari’s text and each is accompanied by a historical annotation researched and written by students in the collaboratory. See the Stanza Della Segnatura Virtual Experience here.

Roll over to scroll through images.

Students in this Collaboratory worked with Kenneth E. Phillips from USC’s Department of Physics and Astronomy and Curator for Aerospace Science at the California Science Center as well as the Center’s Curation and Exhibit Development Team to research and design an interactive, multiplayer museum exhibit on the challenges of human-piloted deep space missions.

In order to design an exhibit that effectively educates the general public on space travel, students had to conduct research in multiple disciplinary fields, including the diverse planetary geology of our solar system, the basic concepts of orbital mechanics that describe flight trajectories, and lethal biomedical hazards associated with space travel. Students also investigated case studies and best practices for interactive educational exhibits, including issues of accessibility, fairness, and the mechanics of multiplayer gameplay. Students visited the spacecraft galleries at the California Science Center and the award-winning Situation Room Experience at the Ronald Reagan Presidential Library and Museum.

Students developed a five-player, interactive game centered on a Lunar-base resupply mission. The game logic included four distinct phases and mini-games (Launch; Travel; Entry, Decent, and Landing; Base Set Up) two of which allowed players to solve independent problems with the other two requiring teamwork and collaboration. This prototype will inform the development of a large multi-player exhibit entitled Distant Destinations for the California Science Center’s future Samuel Oschin Air and Space Center.

Please email Curtis Fletcher at cfletche@usc.edu with any questions.